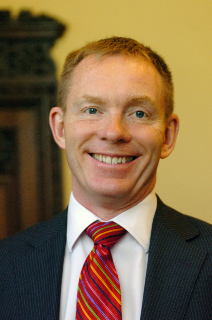 Chris Bryant
Chris Bryant (Christopher John Bryant, born 1962) has been Labour MP for Rhondda Valley since 2001. In Government he was Minister for Europe and Parliamentary Under-Secretary of State for Foreign Affairs at the Foreign and Commonwealth Office. He backed David Milliband's unsuccessful campaign to become the leader of the Labour Party. In opposition he is Shadow Minister for Political and Constitutional Reform.

Chris Bryant was the first person to hold his civil partnership, to Jared Cranney, in the Houses of Parliament when Gordon Brown was Prime Minister.[1]