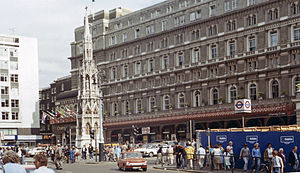 Charing Cross Station forecourt with replica Eleanor Cross
Charing Cross is an area of the City of Westminster, just south of Trafalgar Square. It is often taken to be the exact centre of London. The name is now mainly associated with the nearby Charing Cross station.

Charing Cross Hospital, known for its gender identify clinic, was located near Charing Cross until 1973, when it moved to Hammersmith.

In 1703 the blackmailer Thomas Vaughan was sentenced to be whipped from Temple Bar to Charing Cross, and to stand in the pillory there.[1]

In 1993 the murderer Colin Ireland was convicted after being seen on video with a victim on Charing Cross Station.

The Heaven nightclub is located in the arches under the station.