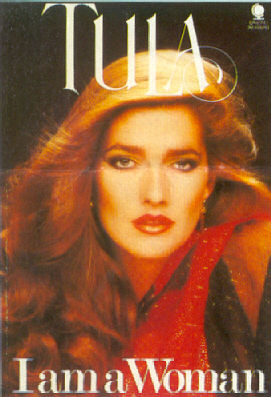 Cover of I am a Woman
Caroline Cossey (originally Barry Kenneth Cossey, born 1954) is an actress and model, also known as Tula.

She was born in Brooke, Norfolk, with the XXXY chromosome pattern, a variant of Klinefelter's syndrome, and raised as male, but suffered bullying in her childhood because of her feminine appearance.

Cossey started transitioning after befriending a post-operative trans woman.[1] By 17, Cossey was receiving hormone therapy, living full-time as a female, and had begun a career as a showgirl at a London nightclub.[1] Despite initial shock, Cossey's parents were eventually supportive.[2] Following breast augmentation surgery, Cossey worked as a showgirl in Paris and as a topless dancer in Rome to save up for gender reassignment surgery. After years of hormonal and psychological treatment, and legally changing her name, shehad her final surgery in 1974 at Charing Cross Hospital, London.[2]

She now began working as a model, using the name "Tula", and appearing in magazines such as Australian Vogue, Harper's Bazaar and Playboy.[1]

In 1978 she won a part in the game show 3-2-1 but dropped out when a journalist threatened to reveal her past as a man.

Tula was cast as an extra in the 1981 James Bond film For Your Eyes Only.[3] Shortly after the film’s release, the News of the World came out with a front page headline "James Bond Girl Was a Boy." By her own accounts, Tula was so upset she contemplated suicide. However, she continued her modelling career.[1] Tula responded by releasing I Am a Woman, her first autobiography.

Tula became engaged to Count Glauco Lasinio, an Italian advertising executive, who was the first man to date her knowing of her past. He encouraged her to petition for changes in the British law concerning transsexuals. The engagement ended, but her legal efforts continued for seven years, eventually reaching the European Court of Human Rights.[2][4]

In 1985, Tula appeared extensively in the video for The Power Station's "Some Like It Hot". After breaking up with Lasinio, Tula met Elias Fattal, a Jewish businessman, who was unaware of her history until he proposed marriage on St Valentine's Day 1988. When she told him, rather than rejecting her, he merely asked if she would convert to Judaism. She agreed.[2] They were married on 21 May 1989, just weeks after the European Court of Human Rights decided to legally recognize Tula as a woman. They returned from their honeymoon to find that the News of the World had published a story on their wedding. Fattal's family was angry and persuaded him to have the marriage annulled.[2]

On 27 September 1990, the European Court overturned their decision on a British government appeal.[2] (Later, the Gender Recognition Act 2004 was passed, giving transgender people in the United Kingdom means to change their legal sex.) Tula returned to modelling, which she had given up four years earlier.[2]

In 1991, Tula released My Story, her second autobiography. In it she gave details of her transition and her unsuccessful battle with the European Commission. She was featured in the September 1991 issue of Playboy, in a pictorial, "The Transformation Of Tula", as an acknowledged transsexual.[5]

Tula married Canadian David Finch in 1992.[6] They live together in Kennesaw near Atlanta, USA.