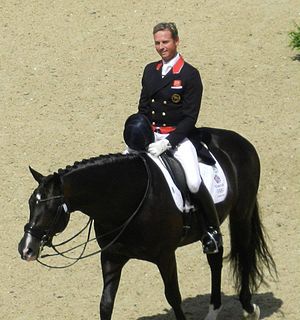 Carl Hester at the 2012 Summer Olympics
Carl Hester (born 1967)[1] is a British dressage competitor, who has represented Great Britain in the Olympic Games. Carl was raised on Sark, in the Channel Islands. The island has no cars, so horses are common and Carl learnt to ride from a young age.[2]

According to the Horse Exchange.com, Carl is the former partner of Spencer Wilton.[3]

At the London 2012 Olympic Games, Carl Hester was one of the team that won the gold medal for Team Dressage, on his horse Uthopia; he was one of ten openly gay or lesbian competitors to win medals.[4]

Carl Hester was ranked number 5 in the Pink List 2012.