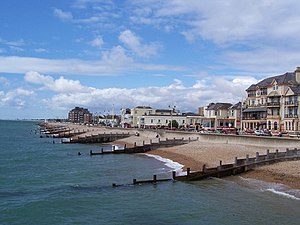 Bognor Regis seafront viewed from the pier
Bognor Regis is a seaside town in the Arun district of West Sussex.

After King George V recuperated there from an illness, the King was asked to bestow the suffix "Regis" (Latin: "of the King") on "Bognor".[1] The petition was presented to Lord Stamfordham, the King's Private Secretary, who in turn delivered it to the King. King George supposedly replied, "Oh, bugger Bognor." Lord Stamfordham then went back to the petitioners and told them, "the King has been graciously pleased to grant your request."[2]

In October 2015 it was announced that a "brand new, very LGBT-friendly weekend festival" would be launched at Butlin's in the new year.[3]