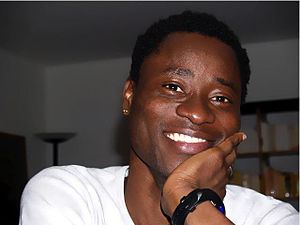 While studying at the University of Lagos he was outed in a university magazine. In 2004 he became the first Nigerian gay man to appear on national television, as a guest on the talk show New Dawn with Funmi; it was on this show that Alimi confirmed his sexuality as a homosexual and asked for social acceptance from the public. His decision to come out of the closet generated potential love interests and death threats; Alimi was disowned by his family and most of his friends – including some in the gay community – and lost his home and his job, and New Dawn's live format was cancelled. He became a gay activist and helped found a gay rights organisation, the Independent Project for Equal Rights – Nigeria.

An attempt on Alimi’s life in 2007, and continued repression of gay rights and hostile opposition against LGBT organisations, prompted him to leave Nigeria. In 2008 He was granted asylum in the UK. In 2011 he completed a Master's degree at Birkbeck University in "Global Governance and Public Policy". His academic research is titled “Access to Anti-retroviral Medications in Middle, Low income countries and the Intellectual Property Rights”.

Bisi Alimi continues to work for LGBT rights in Africa, and is Director in charge of Africa at the Kaleidoscope Trust.