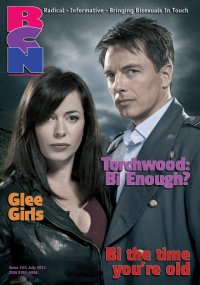 Bi Community News is a community press magazine about bisexuality, bi life, bisexuals in the wider world and in particular the UK bisexual community / scene.

The name was decided by a vote of people attending the annual bisexuality convention BiCon 1995, following a discussion workshop on the need for an independent bisexual press due to the lack of such a voice.

It has been published since 1995, initially every month, and (at 2020) is still publishing regularly six times a year. More than 140 issues have been printed.

BCN (as it is more often called) has a Constitution which reads:

Since around 2000 it has been edited by Jen Yockney. The early issues were produced by a collective and had a "rotating editor" arrangement with a change in the person taking the helm on each edition.

Previous bisexual magazines in the UK were Bi Monthly and BiFrost.