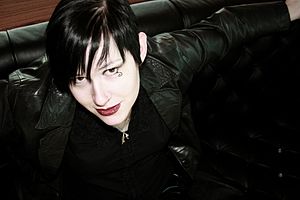 Bethany Black
Bethany Black (born 1978) is a stand up comedian from Chorley, Lancashire.[1] She is known for performing black comedy, dealing with controversial subjects.[2][3] She adheres to a vegan diet.[4]

Black had a troubled childhood, suffering from depression. She attended Manchester Metropolitan University, where she got a degree in film, television and cultural studies.[5] Black had a nervous breakdown and attempted suicide on several occasions.[4] Once she tried to hang herself, but the ceiling gave way. On another occasion she attempted to gas herself in a car, but the car ran out of petrol.[6] She then came out to her family twice: first as a trans woman, and then as a lesbian. Assigned male gender at birth, Black eventually underwent sex reassignment surgery and discusses her transition in her stand-up act.[2][3]

"Often billed as "Britain's only Goth, lesbian, transsexual stand-up comedian", the award-winning Bethany Black herself resists anyone's attempt to pigeonhole her. She began in stand-up in 2004 and her career took off when she opened Manchester's Pride festival in 2005."[7]