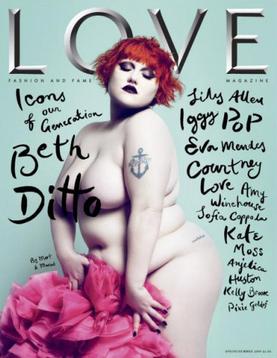 Ditto on the premiere cover of London's Love Magazine. She has been an outspoken advocate for large women being body-positive.
Beth Ditto (Mary Beth Patterson, born 1981), is an American singer-songwriter, most famous for her work with the indie rock band Gossip.

In February 2009, she was featured in London as the cover model for the premiere of Love magazine with prominent public advertising.[1] In July that year Beth's fashion collection for the UK retailer Evans was released for sale, both online and in selected stores across the UK.[2]

She was included in the "Another Country" section of the Independent on Sunday's Pink List 2010. The citation said:

"Plus-sized frontwoman, Beth Ditto, has had another busy year, leading her band, Gossip, on a barn-storming European tour while still finding time to attend the Cannes Film Festival, where her choice of outfit sent the blogosphere into a spin. The Arkansas export was nominated for outstanding music artist at the 2010 Gay and Lesbian Alliance Against Defamation (GLAAD) awards."[3]