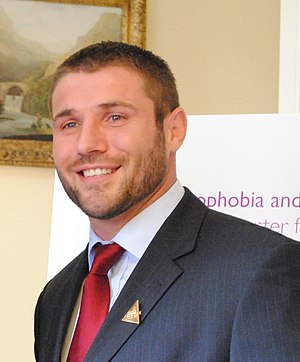 This article is about the former rugby player. For the journalist, see Benjamin Cohen

Ben Cohen (Benjamin Christopher Cohen, born 1978) is a former Rugby Union player, who has campaigned against bullying, and is well known as a straight opponent of homophobia.

Ben Cohen was born in Northampton and played for the Northampton Saints from 1996 to 2007. He then played for a French team for two years, and for Sale Sharks from 2009 to 2011 when he retired from rugby. He played for England many times from 2000 onwards.

Ben Cohen is clinically deaf, and has been involved in making rugby more accessible to young deaf players.[1]

In 2011 he founded the Ben Cohen StandUp Foundation, which supports anti-bullying efforts in the UK and USA. Its declared mission is "to raise awareness of the long-term, damaging effects of bullying and to raise funds to support those doing real-world work to stop it.[2]

He was listed among "Non-LGBT Friends" in the Independent on Sunday's Pink List 2011:

"A former England international, Ben is one of few sportsman actively fighting homophobia in sport. He retired from professional rugby this year to focus on The Ben Cohen StandUp Foundation, which combats homophobia and bullying."[3]

In June 2013 he was one of the first set of people to be included in the National Gay and Lesbian Sports Hall of Fame in Chicago, USA.[4]