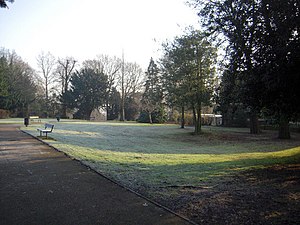 Part of the park
Beaulieu Heights is a public open space in Upper Norwood, London Borough of Croydon. "Beaulieu" is locally pronounced as if spelt "Beulah". Croydon Council bought the land from the Crown Commissioners in 1938, and it was opened to the public after the Second World War.[1]

The Croydon Council website states that "Toilets are adjacent to the park entrance in Church Road,"[2] although the toilets, and indeed the Church Road entrance, have been out of use for many years. There are currently no toilets, and there are only two entrances, in South Norwood Hill and Auckland Road. The website also states that "The woodland is locked at night," although this practice was abandoned following local protests.

The park includes a long-established gay cruising area, which has been recognised as a Public Sex Environment (PSE).

In 2002, a local man, Geoffrey Windsor, was found dead in the park. The murder was thought to be homophobic,[3] but has never been solved.