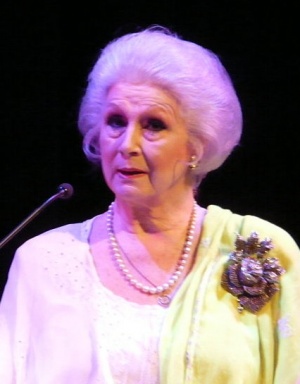 April Ashley in 2011
April Ashley (born 1935) is a former model and restaurant hostess, and was the first British person to be outed as transsexual.

April Ashley was born Toni Jameson on 29 April 1935 in Liverpool and joined the Merchant Navy aged 14.

In the 1950s she moved to Paris and worked as a drag queen under the name April E. In 1960 she had gender reassignment surgery in Casablanca. She became a successful fashion model, and had a small part in the film The Road to Hong Kong but her credit was dropped from the film after she was outed as a transsexual by the Sunday People in 1961.

In 1963 she married the Arthur Corbett (who later succeeded to the title of Baron Rowallan). Corbett knew about her history when they married, but in 1970 he sought to have the marriage annulled on the grounds that she had been born male. In the ensuing court case (Corbett v Corbett) the court decided that she was still legally male, and the marriage was therefore annulled.

In 2005, following the passage of the Gender Recognition Act 2004, April Ashley was recognised as a woman and issued with a new birth certificate.

In June 2012 she received an MBE in the Queen's birthday honours, for her services to trangender equality.

Based on the Wikipedia article: http://en.wikipedia.org/wiki/April_Ashley