Not to be confused with the guitarist of the same name. 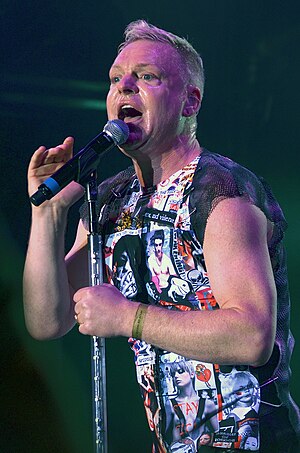 Andy Bell comes from Peterborough. In 1985, while working on the meat counter at Sainsburys supermarket, he responded to a newspaper advert that was looking for a singer.[1] He was picked by Vince Clarke and together they formed the group Erasure, which has sold over 20 million albums worldwide.

Andy Bellis openly gay and was a longtime partner of Paul M Hickey.[2] Bell told Melody Maker in 1986, "I don't want to go out of my way to talk about it but I'm not going to pretend I'm not [gay]. I won't portray a heterosexual in videos and we're consciously doing lyrics that could apply to either sex". He told Barry Walters of Seventeen, "I want to be known as a good performer but it's important to me to take a stance. If you're doing music, you should use it for something and have substance. Being gay and open about it is my substance".[3]

In December 2004 he publicly announced that he is HIV positive and has been aware of this since 1998.[4] In a 2007 interview, Bell remarked that a complacency exists among gay men about HIV, specifying that:

"There are definitely HIV-positive people who meet other HIV-positive men, and like still having unprotected sex. I think it must be quite hard for young gay men because there is so much for them now to do – there are so many saunas and stuff like that for them to go to, and it's so easy to get it."[5]

He has suffered from avascular necrosis (unrelated to his HIV diagnosis) and has had both hips replaced. Bell has stated that this keeps him from "pogoing around" compared to previous performances.[5]