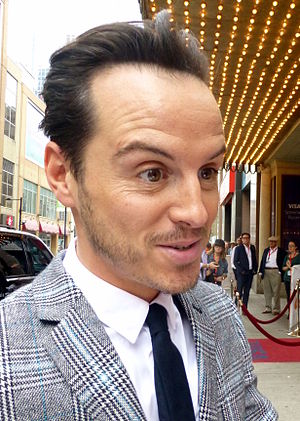 He is best known as Sherlock Holmes' nemesis Moriarty in the BBC drama series Sherlock,[1] and he had a guest role in the second series of Garrow's Law on BBC One, playing a gay man, Robert Jones, on trial for sodomy.[2]

"Mercifully, these days people don't see being gay as a character flaw. But nor is it a virtue, like kindness. Or a talent, like playing the banjo. It's just a fact. Of course, it's part of my make-up, but I don't want to trade on it."[1]

On being asked as to how he prepared his accent for his BBC2 drama Legacy, in which he played a KGB spy, he said:

"There isn't a huge amount of footage of Russians speaking English as a second language, so I started looking at Vladimir Putin videos on YouTube. But then Putin introduced anti-gay legislation this summer – so, being a gay person, I switched to Rudolf Nureyev videos instead. It was another Nureyev defection of sorts!"[1]

He was listed number 22 in the Rainbow List 2014. The citation said:

"Best known as Sherlock’s Moriarty, the 38-year-old Irishman publicly discussed his sexuality for the first time in an interview with The Independent at the end of 2013. And this year he played the bookshop owner-cum-activist Gethin in the joyous gay-rights film Pride."[3]