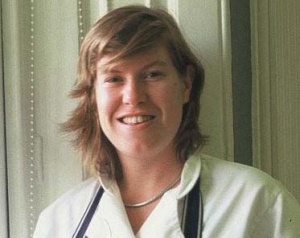 Born and raised in Hammersmith, her father was a consultant psychiatrist, historian and writer; her mother a writer.[1] She was educated at St Paul's Girls' School.[2] Her mother died when she was aged 17, and combined with her coming out as gay, she found adjusting to adult life difficult and was expelled from school.[1]

In 1991, McEvedy completed her classical French training at the Cordon Bleu in London. She also obtained the Higher Certificate from the Wine & Spirit Education Trust.

She later worked at the Tabernacle, Notting Hill, Green’s, The Belvedere in Holland Park, Alfred’s, The Groucho Club and The River Café. She got her first Head Chef position at Tom Conran’s The Cow, in Notting Hill, at the age of 24.

During a spell in the USA, facilitated by being awarded a special visa as "an alien with extraordinary ability in the culinary arts", McEvedy worked at Rubicon and Jardinière in San Francisco, and ran the kitchen at Robert De Niro’s New York restaurant Tribeca Grill (regularly doing 500 covers a night). Whilst in New York, she catered for an exclusive Democratic Party fundraiser, personally cooking for President Clinton.

Upon returning to London, McEvedy joined The Good Cook group, initially as Head Chef of The Tabernacle, a community restaurant in Notting Hill, and later as Head Chef of The Good Cook in Kensington High Street. In Summer 2000, she set up the first outdoor café in the Zaha Hadid Pavilion at the Serpentine Gallery. From 2002-2004, she was the inaugural Chef in Residence at the Institute of Contemporary Arts.

McEvedy co-founded Leon, a healthy fast-food restaurant group, which opened its first outlet in Carnaby Street in 2004.[3] Six months after opening, Leon was named the “Best New Restaurant in Great Britain” at the Observer Food Monthly Awards. In March 2009 McEvedy gave up her role at Leon to focus on writing and television work, but remains a shareholder in the business.

In 2000, McEvedy published her first book, The Good Cook (Hodder), and in October 2006 published her second book, Allegra McEvedy’s Colour Cookbook (Kyle Cathie). It won the International Association of Culinary Professionals 2007 Cookbook award in the Chefs and Restaurants category. In October 2008 her third book, Leon: Ingredients & Recipes (Conran Octopus), was called by Giles Coren of The Times “Without doubt, the coolest food book I have ever seen.”

Since 2007, McEvedy has been Chef in Residence at The Guardian, for which she writes a weekly column and features, and contributes a monthly live, internet “cook-along”.[4]

A six-part BBC2 series Economy Gastronomy presented by McEvedy and Paul Merrett began in August 2009, accompanied by a book of the same title.

She was appointed (MBE) in the 2008 Birthday Honours for services to the hospitality industry.[5]

In August 2006, she joined her partner Susi Smither in a civil partnership. At the reception, Heston Blumenthal did the canapes, with the wedding cake a £1,000 tier of Neal's Yard cheeses.[1]

She is a Patron of Notting Hill Farmers’ Market, The Food Chain and the London Gay Symphony Orchestra[6]

"One of the UK's most prominent chefs, McEvedy has written five books on cooking and appeared in numerous television shows, most recently Matt and Allegra's Big Farm with Matt Dawson. She entered a civil partnership with businesswoman Susi Smith in 2006."[7]

Adapted from the Wikipedia article of the same name.