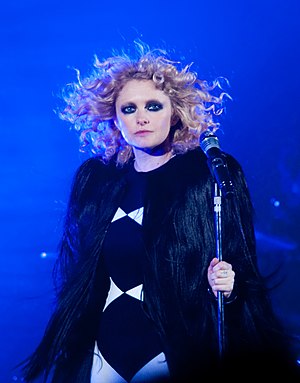 She was born in in Enfield, and went to school in Alton, Hampshire, where she was involved with friends in various bands. She later moved to London, where she lived in a squat, subsequently studying at Middlesex University.

In 1999 she was introduced to the composer Will Gregory, and they decided to form a band together, to be called "Goldfrapp" which has produced several albums.

In February 2010 she confirmed in an interview with The Sunday Times, Goldfrapp that she was dating film editor Lisa Gunning, but rejected being defined as a lesbian, saying,

"I think of everything as being about a person and a relationship, and I am in a wonderful relationship with a wonderful person. It just happens to be with a lady... It’s something I’ve thought about for a long time and it concurs with my philosophy on life and sexuality. I don’t think it can or should be pigeonholed. I’ve thought about this since I was a teenager. I’ve always found it claustrophobic to think about having to put things into categories like that. My sexuality is the same as my music and my life. Why does it need a label?"[1]

"Outed by a national newspaper, the beautiful and talented singer is the frontwoman of chart-topping band Goldfrapp."