From LGBT Archive
(Redirected from A E G Wright)
Jump to: navigation, search 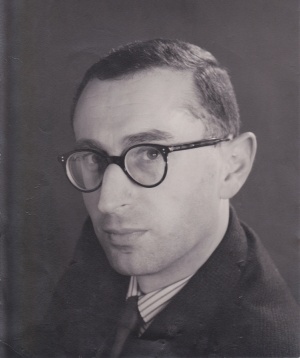 Antony Grey in the 1960s
Antony Grey (1927–2010, real name Anthony Edgar Gartside Wright) was an English gay rights activist. He was born in Gatley, Cheshire, but his family moved to Sheffield when he was nine. After graduating in history at Magdalene College, Cambridge in 1948, he worked as a sub-editor on the Yorkshire Post before moving to London to work as a press officer at the British Iron and Steel Federation in 1949. This gave him experience of parliamentary and media lobbying, and while there he read for the bar. Although admitted as a barrister at the Middle Temple in 1957, he never practised at the bar but remained at the Federation until 1961. After leaving it, he worked briefly in public relations at the London Press Exchange.

Antony Grey in later life
In 1958, he began volunteering for the Homosexual Law Reform Society (HLRS), becoming its Honorary Treasurer in 1960, and Secretary of the HLRS and the Albany Trust in 1962. At that time it was thought inappropriate for an openly gay man to hold this position and, also following his mother's request that he should not use the family name and embarrass his father and their family circle in Sheffield, he adopted the pseudonym Antony Grey – chosen as "there are few entirely black-and-white issues in life" [1] – for use in his gay campaigning activities.

He campaigned tirelessly for the decriminalisation of gay sex, as advocated in the Wolfenden Report, organising support for the various attempts at law reform, culminating in the passing of the Sexual Offences Act 1967. Though it was a major step forward, Grey always regretted the compromises made in getting the act through parliament. While what was then the Sexual Offences (No 2) Bill was going through the Commons, Grey published an article in the February 1967 issue of Arena Three - the publication of the Sexual Minorities Research Group - deploring what was being proposed and saying that "the more one considers the details of Mr Abse's bill the less adequate it appears". While regretting the exclusion of the armed forces and members of the merchant navy, he laid particular stress on the bad effects of the high age limit of 21 on teenage homosexuals, the dangers presented by the ambiguous nature of the offence of procurement, and the restrictive definition of privacy. This, he warned, "could quite easily prove as oppressive, and as conducive to blackmail, as the original Labouchère Amendment of 1885". Overall, he concluded that the bill, "welcome though it is, remains a woefully hesitant step towards that comprehensive overhaul of all our laws and attitudes about sex ('normal' or 'abnormal') which is called for in the second half of the twentieth century". [2]

In the New Oxford History of England,[3] Sir Brian Harrison observes that "his rare combination of high-serious commitment, shrewd political effectiveness, and total lack of self advertisement was precious indeed" to the campaign for law reform.

In 1970 he became secretary of the Sexual Law Reform Society (successor to the HLRS). He was Director of the Albany Trust from 1971 to 1977. He worked with (and often served on the committees of) a number of voluntary organisations including the National Council for Civil Liberties (now Liberty), the British Association for Counselling and Physiotherapy, the National Association of Voluntary Hostels, the Josephine Butler Society, and the Defence of Literature and the Arts Society. He obtained a diploma in counselling skills from the South West London College in 1981.

In 1998 he was awarded the Pink Paper Lifetime Achievement Award and in 2007 he was elected as Hero of the Year by Stonewall supporters.

"Antony Grey, former secretary of the Homosexual Law Reform Society, which won a change in the law in 1967. He argued, unsuccessfully, for equalising the age of consent for gay people to 16, in line with heterosexuals, when the law was changed in 1994. The age of consent for gay men was eventually lowered to 16 in 2001. Now in his 80s, Mr Grey has never received an honour. "[4]

He met his partner, Eric Thompson, in 1960 and they lived together until Antony Grey's death fifty years later. In 2008 they became civil partners. They had difficulty finding a place to live together at first, but in 1961 eventually found a flat at 121 Broadhurst Gardens, West Hampstead. This turned out to be the road where Esmé Langley lived at number 47. Sixty years earlier, Frederick Rolfe (Baron Corvo) had lived at number 69 when he wrote Hadrian the Seventh;[5] and subsequently Laurence Collinson, playwright, transactional analyst, and prominent member of the Gay Liberation Front lived at 123.

Grey suffered from disabling ill health from November 2004, but nevertheless managed to visit Italy in 2008 with Andrew Lumsden, who described the holiday in his book Souvenirs of Sirmione.[6].

Grey's papers are deposited in the Hall-Carpenter Archives at the London School of Economics.

In December 2008 he circulated privately to his family and friends a memoir, Personal Tapestry: woven from the memories of A E G Wright (Antony Grey), The One Roof Press, London. This brought together the personal and public sides of his life, and copies are held by the British Library and the libraries of Magdalene College, Cambridge, and the London School of Economics.

In his later years he blogged as "Anticant": see http://antarena.blogspot.co.uk/

The entry in the Oxford Dictionary of National Biography is under his real name.[10]

Other sources include Therapy Today [11] and the BBC's Last Word.[12]