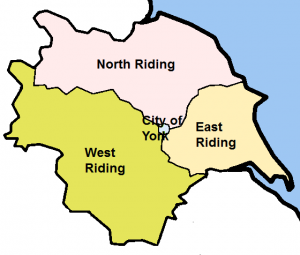 Historic divisions of Yorkshire: the three Ridings and the City of York 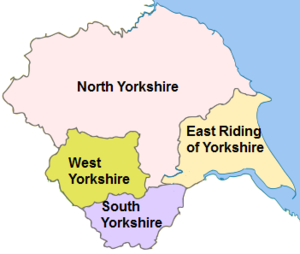 Current ceremonial counties of Yorkshire
Yorkshire is historically the largest county in England. Because of its size it was divided into the East Riding, West Riding, and North Riding, each of which had its own county council from 1889. It is now part of the Yorkshire and the Humber region.

In 1974 and again in 1996 the local government areas were reorganised, and Yorkshire is now divided into four ceremonial counties:

Between 1974 and 1976 the current East Riding (including Hull) was joined with part of Lincolnshire to comprise the county of Humberside.

Anne Lister lived in Yorkshire in the early 19th century.

Yorkshire Terriers FC is a gay and lesbian football club based in Leeds.