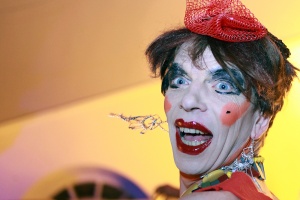 David Hoyle was born in Blackpool and bullied because of his homosexuality as a child. He began performing at a local working men's club before moving to Manchester and then to London. In the early 1990s he began performing in gay clubs as the Divine David, an "anti-drag queen", and appeared on television.

In a way the Divine David became the patron saint of decadence and nihilism and all the rest of it, and it's hard for that not to affect your own actions... As much as I used to say, "Oh yes, you have to be very sure of your identity to be doing all this business," I don't think I actually was. If you're used to creating aliases and camouflage and all that sort of palaver, eventually you have to peel it all away and work out who you are.[1]

In 2010 he wrote and starred in the film Uncle David.

He has performed many times at the Royal Vauxhall Tavern.