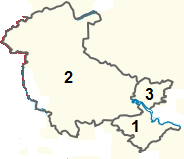 Central Scotland Police, covering the region, was replaced by the Police Service of Scotland in 2013.

Forth Valley's LGBT Development Group meets regularly to ensure the inclusion of LGBT people in services, and across the community.[1]