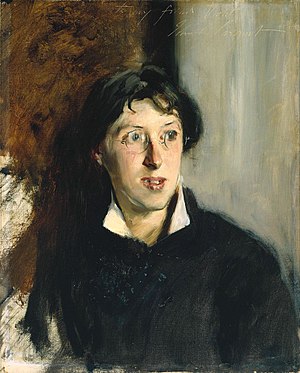 Portrait of Violet Paget by John Singer Sargent
Vernon Lee was the pseudonym of the writer Violet Paget (1856–1935). She was born in Boulogne to English parents, and lived much of her life on the continent. She was the half-sister of the poet Eugene Lee-Hamilton.

She was noted for her supernatural fiction, and wrote many essays on art, music, and travel. During the first world war she was active as a pacifist.

She was a proponent of the Aesthetic movement, and after a lengthy written correspondence met the movement's effective leader, Walter Pater, in England in 1881, just after encountering one of Pater's most famous disciples, Oscar Wilde.