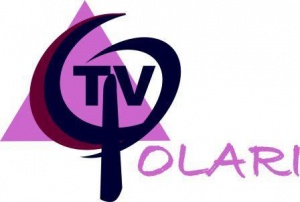 Logo from the Facebook page
TV Polari was a television channel launched in 2008 by Lancelot Fougere and Adrian Doughty. It sought footage from events in the LGBT community, from concerts and cabaret to Civil Partnerships and Travel videos. TV Polari considered every inch of LGBT life to be important and were keen to hear about further programming ideas from the LGBT community.

18th November 2009 (Brighton, UK): Philips Electronics joined forces with IP software specialist Global Digital Broadcast (GDBTV) and TV Polari to launch the first television set with a fully-integrated IPTV service, creating a platform which was claimed to be seven times the size of Sky (citation needed). As the first television set manufacturer in Europe, two out of three sets used to be Philips brand and, with expected sales of approximately 50 million television sets in Europe alone, this latest acquisition puts Philips ahead of the game and spearheading the future of TV.

16th September [year needed] Together TV has launched a channel on the TV Polari Network, for couples friends and family.

10th July 2009 TV Polari launched its Lesbian Channel, starting with the first season of The L Word with other seasons planned, along with lesbian cinema from around the world.