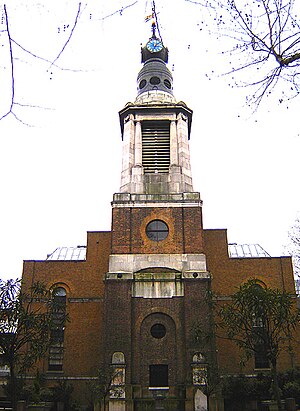 It was consecrated on 21 March 1686 by Bishop Henry Compton. after whom Old Compton Street is named. The tower was added by 1718 but was unstable and had to be rebuilt in 1801. The tower is the only part of the original building to have survived the second world war, the rest of the church having been destroyed by bombing in 1940. A new church room was opened in 1991, and is accessed from Dean Street. It is extended for Sunday services by opening it up into the community hall, which is otherwise available for functions. There is a small garden with raised semicircular seating. The churchyard, accessed from Wardour Street, and including the site of the original church, is now a public open space.

The church has hosted a number of events of LGBT interest, for instance:

In 2011 the then vicar was dismissed following allegations of "lurid" conduct involving a gay couple.[1]