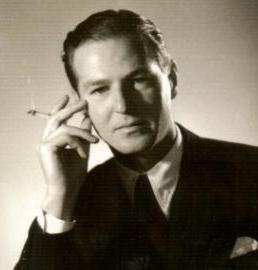 Terence Rattigan
Sir Terence Mervyn Rattigan (1911–1977) was one of England's most popular 20th-century dramatists. His plays are generally set in an upper-middle-class background. He is known for such works as The Winslow Boy (1946), The Browning Version (1948), The Deep Blue Sea (1952) and Separate Tables (1954).

Rattigan was born in South Kensington, and educated in Cobham and at Harrow School and Trinity College, Oxford.

Rattigan was gay,[1] with numerous lovers but no long-term partners, a possible exception being his "congenial companion [...] and occasional friend" Michael Franklin.[2] It has been claimed that his work is essentially autobiographical, containing coded references to his sexuality, which he kept secret from all but his closest friends. There is some truth in this, but it risks being crudely reductive; for example, the repeated claim that Rattigan originally wrote The Deep Blue Sea as a play about male lovers, turned at the last minute into a heterosexual play, is unfounded,[3] though Rattigan claimed otherwise.[4] On the other hand, for the Broadway staging of Separate Tables, he wrote an alternative version of the newspaper article in which Major Pollock's indiscretions are revealed to his fellow hotel guests; in this version, the people the Major approached for sex were men rather than young women. However, Rattigan changed his mind about staging it, and the original version proceeded.

Rattigan was fascinated with the life and character of T E Lawrence. In 1960 he wrote a play called Ross, based on Lawrence's exploits. Preparations were made to film it, and Dirk Bogarde accepted the role. However, it did not proceed because the Rank Organisation withdrew its support, not wishing to offend David Lean and Sam Spiegel, who had started to film Lawrence of Arabia. Bogarde called Rank's decision "my bitterest disappointment".