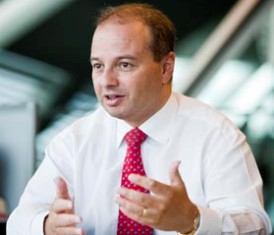 Sir Simon Milton
Sir Simon Milton (Simon Henry Milton, 1961–2011)[1] was a Conservative politician. He lately served as London's Deputy Mayor for Policy and Planning, and before that was a leader of Westminster City Council and Chairman of the Local Government Association.

Milton was raised in Cricklewood. He was educated at St Paul's School and Gonville and Caius College, Cambridge, where he was Chairman of the Conservative Association and President of the Cambridge Union].[1]

He started his working career in Sharaton's, his father's business, a chain of patisserie shops and bakers with about twenty shops in North London. The business was sold to Ponti's on his father's retirement.

He was named a Knight Bachelor in the 2006 New Year's honours list for services to local government.[3]

With effect from 6 May 2008, Milton was appointed to the position of Senior Adviser, Planning, in the administration of Mayor of London Boris Johnson.[4] This led to his resignation as a councillor. From September 2008 he became a full-time politician as the Deputy Mayor for Policy and Planning, he was responsible for overseeing policies for the built environment. In June 2009, Milton was also appointed Chief of Staff to the Mayor, with responsibility for managing the Mayoral advisors, as well as the Greater London Authority budgets and administration. He was the Mayor's most senior appointed advisor.[5]

Milton was diagnosed with leukaemia in 1990.[1] He and his partner Robert Davis, fellow Westminster Councillor and former Lord Mayor of Westminster, were together for over 20 years and entered into a civil partnership in June 2007.[6]

He was a member of the West London Synagogue.[7]