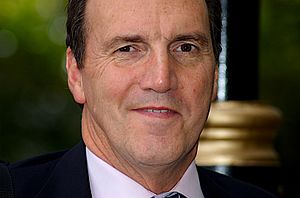 He was elected to Parliament as a Liberal in the Bermondsey by-election of 24 February 1983, beating the Labour candidate Peter Tatchell. The election was marred by homophobic propaganda against Tatchell from his own side, Simon Hughes's own sexuality being kept private.

In 2004 Simon Hughes was the Liberal Democrat candidate for Mayor of London.

Hughes stood for leadership of the Liberal Democrats in 2006. Peter Tatchell said: "I hope Simon is elected as party leader because of all the contenders he is the most progressive on human rights, social justice and environmental issues."[1] During the election Simon Hughes was outed by The Sun as bisexual. He confirmed this (having previously denied being gay), revealed his own homosexual experiences, and apologised for not speaking out against homophobia in the 1983 campaign in 2006.[2] Peter Tatchell reaffirmed his opinion on the leadership election after Hughes' outing by The Sun. He said "it is time to forgive and move on... I am on the left of the Green Party. I don't support the Lib Dems, but if I was a member I would vote for Simon as leader."

In 2008 Simon Hughes played an important part in getting Mehdi Kazemi, a young Iranian whose boyfriend had been executed in Iran, the right to stay in the UK.[3]

In 2010, when the Liberal Democrats joined the coalition government, the party's deputy leader, Vince Cable, resigned on being appointed business Secretary, and Simon Hughes was elected Deputy Leader in his place.

Simon Hughes was ranked number 13 in the Pink List 2011 and number 51 in the World Pride Power List 2012. In December 2013 he was appointed Minister of State for Justice and Civil Liberties in the coalition government.

He lost his seat in the Commons at the 2015 general election, and was given a knighthood in the Queen's Birthday Honours.[4]