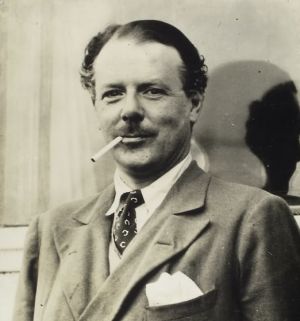 He was born in Tehran, Persia, and was educated at Wellington College and Balliol College, Oxford. From 1909 to 1929 he worked in the diplomatic service. From 1930 to 1931 he edited the "Londoner's Diary" for the Evening Standard.

He stood for Combined English Universities in the 1931 general election for Sir Oswald Mosley's New Party, but broke with Mosley on the formation of Mosley's British Union of Fascists. In 1935 he was elected as National Labour MP for Leicester West. He lost his seat in the 1945 election, and stood unsuccessfully as the Labour candidate in the Croydon North by-election in 1948.

In 1913 he married Vita Sackville-West. They had an open marriage, and both had affairs with members of their own sex. When Vita eloped to France with Violet Trefusis, Harold followed her to try to win her back. Harold himself was involved in a long-term relationship with Raymond Mortimer, whom both he and Vita affectionately referred to as "Tray". Harold and Vita were famously devoted to each other, writing almost every day when separated due to Nicolson's long diplomatic postings abroad, or Vita's insatiable wanderlust. Eventually, he gave up diplomacy, partly so they could live together in England.

They had two sons, Benedict, an art historian, and Nigel, a politician and writer, who published works by and about his parents, including Portrait of a Marriage, their correspondence, and Nicolson's diary.

In the 1930s, he and his wife acquired and moved to Sissinghurst Castle, near Cranbrook in Kent. There they created the renowned gardens that are now run by the National Trust.