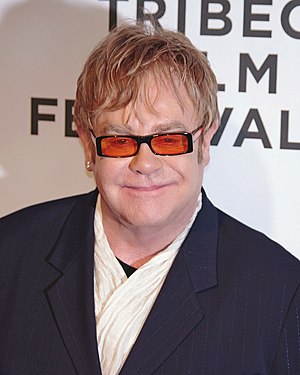 He has sold more than 250 million records, making him one of the most successful recording artists of all time. Many of his songs were written in collaboration with the lyricist Bernie Taupin. His single "Candle in the Wind 1997" has sold over 33 million copies worldwide. In 2004, Rolling Stone ranked him Number 49 on its list of the 100 greatest artists of all time.[1] In 2008, Billboard magazine ranked him as the most successful male solo artist on "The Billboard Hot 100 Top All-Time Artists" (third overall, behind only The Beatles and Madonna).[2]

He has been heavily involved in the fight against AIDS since the late 1980s.[4] In 1992 he established the Elton John AIDS Foundation. In 1993 he began hosting the annual Elton John AIDS Foundation Academy Award Party, which has since become one of the most high-profile Oscar parties in the Hollywood film industry. Since its inception, the foundation has raised over $200 million.

John entered a civil partnership with David Furnish on 21 December 2005 and continues to be a champion for LGBT causes.