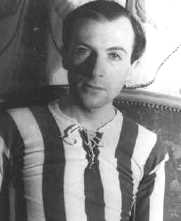 Sir Cecil Beaton
Sir Cecil Beaton (Cecil Walter Hardy Beaton, 1904–1980) was a fashion and portrait photographer, diarist, painter, interior designer and an Academy Award-winning stage and costume designer for films and the theatre. He was named to the International Best Dressed List Hall of Fame in 1970.

Cecil Beaton was also a published and well-known diarist. In his lifetime six volumes of diaries were published, spanning the years 1922–1974. Recently a number of unexpurgated diaries have been published. These differ immensely in places to Beaton's original publications. Fearing libel suits in his own lifetime, it would have been foolhardy for Beaton to have included some of his more frank and incisive observations.

Cecil Beaton attempted to have all the copies of a novel destroyed. The Girls of Radcliff Hall is a novel by the British composer Lord Berners (under the pseudonym "Adela Quebec") in which he depicts himself and friends including Cecil Beaton and Oliver Messell as lesbian schoolgirls. The school is called "Radcliff Hall" in a reference to the lesbian novelist Radclyffe Hall.

Beaton lived for a time at Broad Chalke in Wiltshire and is buried there.