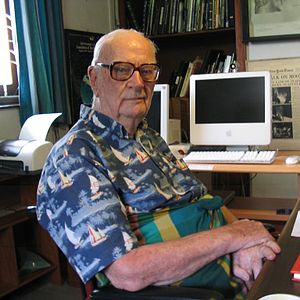 He was born in Minehead, Somerset, and grew up in nearby Bishops Lydeard. He served during World War II as a radar specialist in the Royal Air Force, and then studied mathematics and physics at King's College London. He then became a science writer, specialising in subjects connected with space travel, and invented the concept of geostationary satellites being used for telecommunications.

He was briefly married, but is thought to have been predominantly gay. In 1956 he moved permanently to Sri Lanka, then called Ceylon, where the laws on homosexuality were more liberal than the UK. His companion for many years was the Sri Lankan man, Leslie Ekanayake, whom Clarke called his "only perfect friend of a lifetime".

In 2000 he received a knighthood, the investiture having delayed at his request because of unfounded allegations of paedophilia in the Sunday Mirror. In 2005 he received Sri Lanka's highest honour, Sri Lankabhimanya.