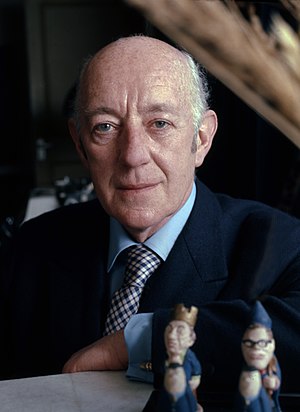 Sir Alec Guinness photographed by Allan Warren
Sir Alec Guinness, CH, CBE (2 April 1914 – 5 August 2000) was an English actor. He was featured in several of the Ealing Comedies, including Kind Hearts and Coronets in which he played eight different characters. He later won the Academy Award for Best Actor for his role as Colonel Nicholson in The Bridge on the River Kwai. He is known for playing Obi-Wan Kenobi in the original Star Wars trilogy, Prince Feisal in Lawrence of Arabia, and George Smiley in the TV adaptation of Tinker, Tailor, Soldier, Spy. He is also known for his portrayal of Herbert Pocket in Great Expectations (1946).

In his biography, Alec Guinness: The Unknown, Garry O'Connor says that Guinness was arrested and fined 10 guineas for a homosexual act in a public lavatory in Liverpool in 1946. Guinness avoided publicity by giving his name to police and court as "Herbert Pocket", the name of the character he played in Great Expectations. The incident did not become public knowledge until April 2001, eight months after his death. Piers Paul Read, Guinness's official biographer, doubts that this incident actually occurred. He believes that Guinness was confused with John Gielgud, who was infamously arrested for such an act around the same period (actually 1953).