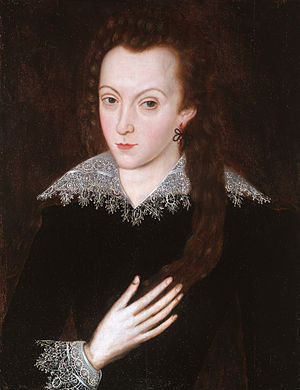 Just before his eighth birthday his father died and he inherited the Earldom.

A. L. Rowse, in 'Shakespeare the Elizabethan', says that the Earl of Southampton had homosexual relations with Sir Henry Danvers, perhaps also with the Earl of Rutland, and lay in his tent with Captain Piers Edmonds, whom he 'would cull and hug him in his arms and play wantonly with him' during the Irish campaign [1].

Southampton was deeply involved in the Essex's Rebellion of 1601, and in February of that year he was sentenced to death. Sir Robert Cecil, who urged the Queen to show the greatest possible degree of clemency, obtained the commutation of his penalty to life imprisonment. He was restored to court under [James 1]].

He married and had several children.

He is buried in the parish church of Titchfield, Hampshire, U.K.
Retrieved from ‘https://lgbthistoryuk.org/w/index.php?title=Henry_Wriothesley,_3rd_Earl_of_Southampton&oldid=44782’
Category: