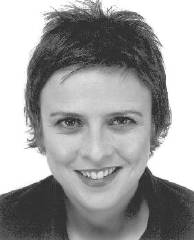 In 2000 she starred in Rhona, a sitcom which she co-wrote with her former partner, Linda Gibson.

She was a contestant in the first series of I'm a celebrity... Get me out of here!. She is sometimes accused of having outed Sue Perkins as her past partner while on the show.[1] However their relationship had not previously been hidden and they had appeared content to be photographed as a couple by the press some months earlier.[2]

She and her current partner, schoolteacher Suran Dickson, appeared together in the Celebrity Wife Swap in 2009.

She wrote the book Nineteen Seventy-Nine: A Big Year in a Small Town, about growing up as a lesbian in the small fishing town of Musselburgh, East Lothian. Her debut novel The Naked Drinking Club was published by Ebury Press in 2007.