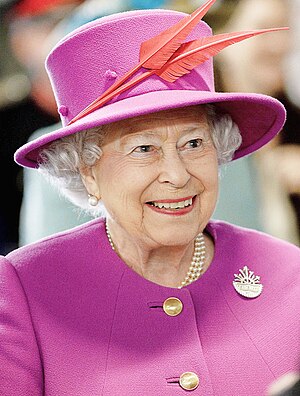 The Queen in March 2015
Elizabeth II (Elizabeth Alexandra Mary, 1926-2022) was the Queen of the United Kingdom and of several other countries around the world, head of the Commonwealth of Nations and Supreme Governor of the Church of England until her death on 8 September 2022.

The Queen's reign saw many important advances for LGBT people. However as a constitutional monarch, she did not normally express an opinion on political issues. She seldom spoke about LGBT issues, and was not a patron of any LGBT charities. However in 2014 she sent a message of congratulations to the London Lesbian & Gay Switchboard on its 40th anniversary.[1]