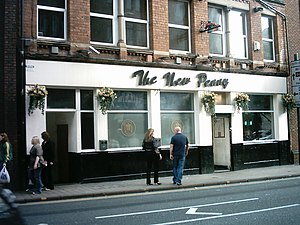 It is reported to be the oldest (longest continually running) gay pub in the UK.[1] It started as the Hope And Anchor in 1953. Although difficulty with the law meant it was a secretive place it was the first gay venue to open outside of London.

After a change of ownership the pub changed its name in 1982 and became The New Penny.

Currently with a late night license the pub has seen some of the best known drag queens appear on its stage, including Lily Savage, Anna Glypta, Fats and Small, Sisters Slim, Amber Dextrous, Miss Orry, Ricky Glass and many more. It is still one of the most popular venues in Leeds attracting both a mixed gay crowd and straights.

The New Penny regained popularity when drinking laws were relaxed to allow a later licence, usually meaning it is the last venue to close its doors at weekends on the Leeds gay scene. It is also annually involved in the Leeds Pride event.

The New Penny has not been without controversy. It was raided by the police in 2005, for suspected drug dealing on the premises.[2]