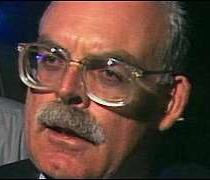 He was born in Bowdon, Greater Manchester (formerly Cheshire) and became interested in flying from an early age. In 1963 he started working for an airline which was then taken over by British Midland. By 1972 he had become Managing Director, and in 1978 he led a management buy-out. In 1999 he sold his controlling interest in BMI to Lufthansa, for an amount that has been estimated to be about £318m.[1]

From 1993 to 1997 he was chairman of Channel 4 television. He is chairman of the Board of Trustees of the D'Oyly Carte Opera Company, which performs the operas of [[Gilbert and Sullivan]

He received a knighthood in 1991, and in 2011 he was created a life peer, as Baron Glendonbrook, of Bowdon in the County of Cheshire. He sits as a Conservative.

Bishop is openly gay, and has spoken out publicly about gay rights[2] and success in the workplace.[3]

"Baron Glendonbrook, the ex-chairman of BMI, started out as an airline baggage handler. His success at the company's helm led to a £223m sale to Lufthansa in 2009. Sir Michael now sits in the House of Lords, on the Conservative benches, and continues to be a prominent voice for gay rights.[4]