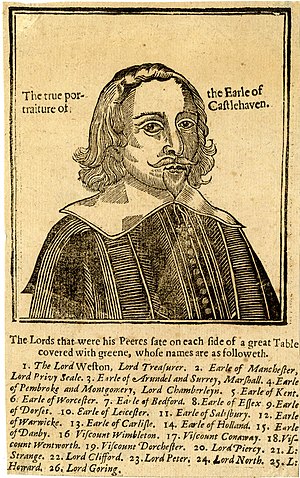 Castlehaven was convicted in 1631, three weeks later executed, beheaded, on Tower Hill for his sexual crimes: an "unnatural crime", i.e. sodomy, committed with his page, Laurence [or Florence] FitzPatrick, who confessed to the crime and was executed and for assisting Giles Browning (or Giles Broadway), also executed, in the rape of his, the Earl's, wife, Anne the Countess of Castlehaven, in which Lord Castlehaven himself participated by restraining her.

The Earl insisted he was not guilty but that his wife and son had conspired in this attempt to commit judicial murder. All the witnesses would have gained from his death. The page who was executed, Laurence FitzPatrick, testified that Anne, Countess of Castlehaven, "was the wickedest woman in the world, and had more to answer for than any woman that lived."