Mary Allen was a prominent suffragette and pioneer of early policewomen. Mary Sophia Allen was born March 1878 to a well-to-done family in Cardiff.

In 1909 Allen was an active militant in the Womens' Social and Political Union. She was imprisoned three times that year and after a hunger strike awarded the WSPU hunger strike medal [1].

Allen was awarded the OBE for services during World War One.

She joined the Women's Police Service (WPS) which was headed by Margaret Damer Dawson. Allen and Dawson cropped their hair and assumed a severe military appearance, and Allen wore her police uniform in public for the rest of her life. In 1915 Dawson made a will which left everything to Allen; when Dawson died unexpectedly in 1920, Allen assumed the role of WPS Commandant.

In November 1922 Allen stood unsuccessfully for Parliament as a candidate for Westminster St George's. During the General Strike of 1926 Allen was involved with the Organisation for the Maintenance of Supplies and turned her Women's Auxiliary Service over to the strike-breaking movement.

The Home Office began to take an interest in Allen's activities in 1927. She was becoming an embarrassment and a nuisance to the Government, partly because of her acceptance abroad as representing the British authorities, and partly because she was mistaken for a Metropolitan Police officer at home. Home Office records covering the period 1927–1934 reveal that she kept dossiers on people she suspected of activities connected with vice and white slavery. She was also suspected of fascist activities, and articles by or about her in national newspapers increased the Home Office surveillance. 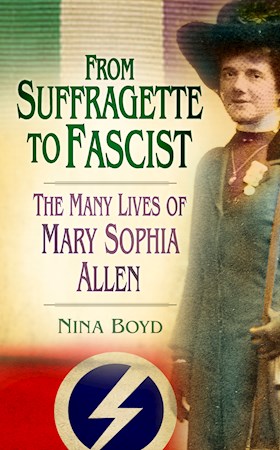 Biography published in 2013 by The History Press

She met Hitler in 1934 and discussed women police with him. She was captivated by Hitler and expressed her admiration for him in public. Once she had joined the British Union of Fascists, she wrote numerous articles for its newspapers and openly declared herself to be a fascist. A Suspension Order under the Defence of the Realm Act 1914 was made against her when suspicions arose about her contacts with Germany.

Her friends included Margaret Damer Dawson, Isobel Goldingham and Helen Bourne Tagart, all of whom she met in her policing days [2]. Allen was a lesbian but never referred to that identification.