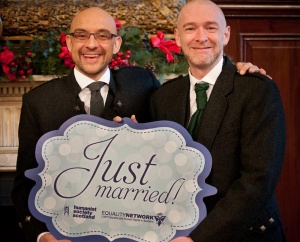 Joe Schofield and Malcolm Brown, who married on the first day the law allowed
The movement towards marriage equality in Scotland proceded roughly in parallel with that in England, and equal marriage finally became law on 4 February 2014. (See Marriage equality for the general background and the situation in the rest of the UK).

In Scotland the campaign for equal marriage was organised by The Equality Network.[1]

In January 2009 Nick Henderson, director of the LGBT Network, submitted a petition to the Scottish Parliament, calling for a change in the law to allow two people of the same sex from getting married, by amending the Marriage (Scotland) Act 1977. The petition also called for allowing same-sex marriage ceremonies to be performed by faith groups, with the consent of the religious institution in question.[2][3]

The Scottish Government held a consultation exercise starting on the 2nd of September 2011,[4] six months ahead of that in England and Wales. The consultation closed on the 9th of December.[5] In the final count there were 77,508 responses, including 14,779 from outside Scotland. Including postcard and petition response, 64% of those who responded said they were against same-sex marriage. However excluding postcard and petition responses to the consultation from within Scotland, 65% were in favour and 35% against.[6] This is consistent with a poll in June 2012 which revealed that 64 per cent of Scots support equal marriage.[7]

On 25 July 2012 the Scottish Government announced that it would introduce equal marriage, together with religious ceremonies for civil partnerships. The bill would be accompanied by safeguards (which were likely to need UK legislation) to assure the religious freedom of groups or individuals opposed to gay marriage.[8]

In December 2012 a draft bill was published for consultation.[9] In May 2013 it was announced that a bill would be introduced within the current session of the Scottish Parliament, with the first weddings possibly as early as 2014.[10] 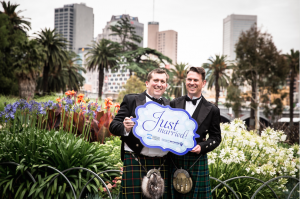 Douglas Pretsell and Peter Gloster, after converting their Scottish civil partnership to a marriage in Australia

The Marriage and Civil Partnerships Bill (Scotland) was introduced in the Scottish Parliament on 27 June 2013.[11] It was different in a few respects from the bill for England and Wales, in particular no religious bodies would be barred from conducting same-sex weddings if they wished to, and there was provision for Humanist weddings.[12]

Stage 2 (during which the Bill is subjected to detailed scrutiny) concluded on the 16th of January 2014. Four major amendments were passed during Stage 2, all of them increasing the difference between the English and Scottish versions:

It was originally hoped that the first weddings could take place in October, but by mid-April it appeared that the date had slipped back towards the end of 2014.[14]

The Act finally came into force on 16 December 2014, enabling couples to convert their civil partnerships to marriage, or to give 15 days notice of their intention to marry. The first couple to make use of the new law were Douglas Pretsell and Peter Gloster, who converted their Scottish civil partnership to marriage at the British Consulate in Melbourne, Australia as soon as the law came into effect at one minute past midnight.[15] The first actual marriages could take place on Hogmany (31 December 2014).[16]

In June 2017 the Scottish Episcopal Church voted to allow same-sex marriages to take place in church, in contrast to the Church of England which is prohibited by law from conducting same-sex weddings, and in opposition to the policy of the worldwide Anglican Communion.[17] Meanwhile the Church of Scotland is considering the issue.