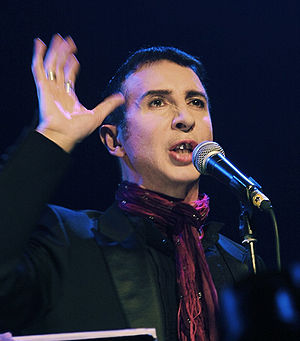 He was born in Southport, went to school in Aireborough, near Leeds and studied performance art at Leeds Polytechnic. In 1979 he formed the band Soft Cell with David Ball.

Marc Almond has lived in London divides his time between London, Moscow and Barcelona.[1] In an interview in 2010, Almond said: "The London I love seems to be disappearing every day. For all its faults, it is the greatest city."[2]

Almond has stated that he dislikes being pigeon-holed as "a 'gay' artist", claiming that such a label "enables people to marginalize your work and reduce its importance, implying that it won't be of any interest to anyone who isn't gay".[3] In 2010, Almond said that he has "a fulfilling work life and a comfortable private life". He has been with the same partner for over 20 years.[2]