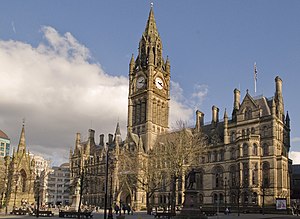 Manchester Town Hall from Lloyd St
Manchester Town Hall is the headquarters of Manchester City Council. It was completed in 1877, and is in a Gothic revival style, which was then considered modern, in contrast to the neoclassical architecture favoured by Liverpool.[1] The council had called for a building "equal if not superior, to any similar building in the country at any cost which may be reasonably required"[2]

Manchester Town Hall is one of the stopping places on the Manchester LGBT Heritage Trail and has been marked by a rainbow mosaic set into the pavement outside.

Allan Horsfall and other gay rights campaigners who lobbied for a change in the law for 40 years were honoured in a ceremony at Manchester Town Hall in October 2004.[3]

A celebration of the life of Allan Horsfall was held there in October 2012.