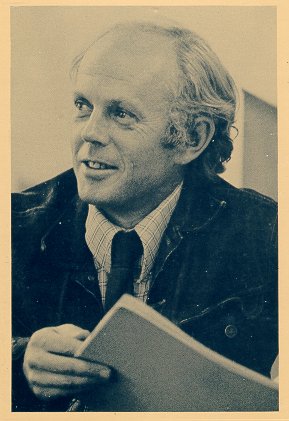 Malcolm Williamson
Malcolm Williamson (1931–2003) was a composer and Master of the Queen's Music. He wrote seven symphonies, and many concertos and other orchestral and choral works, but was noted for his erratic behaviour.

He was born in Sydney, Australia, and studied at the Sydney Conservatorium of Music. In 1950 he moved to London where he worked as an organist, a proofreader, and a nightclub pianist, as well as composing, but was frequently drunk. "He was saved by his marriage in 1960 to Dolly Daniel, 'the one person who could keep him under some kind of control'."[1] They lived in East Sheen, and had three children. Williamson stopped drinking and worked hard at composing, but this was not to last. "Williamson claimed he felt claustrophobic and frustrated. He became a homosexual and flung himself into 'a flurry of gay one-night stands'."[1]

In 1975 he was a surprising choice as Master of the Queen's Music. He wrote a number of "royal" pieces, but notoriously failed to complete the promised "Jubilee Symphony" for the 1977 Silver Jubilee.