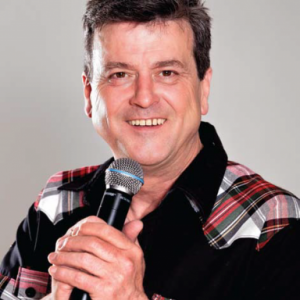 Les McKeown
Les McKeown (Leslie Richard McKeown, born in Edinburgh, 1955) is a pop singer. He was the lead singer for the Bay City Rollers during their most successful period.

He joined the Bay City Rollers in late 1973, The group's intense popularity, nicknamed "Rollermania", took off shortly afterwards. He was with the band until 1978, at which time he left to pursue a career as a solo artist. He released a series of solo albums which saw modest success, primarily in Germany and Japan.

In 1990, he participated in the UK heats of the Eurovision Song Contest with the song "Ball and Chain", which placed fifth.

In 2006, McKeown admitted being a drug user but denied being a dealer.[1] On 3 February 2006, he was acquitted of cocaine dealing. He suggested that he would sue the Metropolitan Police for earnings he lost from an overseas tour that was cancelled as a result of the proceedings.[2]

He lives in Hackney, with his Japanese wife, Peko, and their son. He still tours with his current band, "Les McKeown's Legendary Bay City Rollers" (he is the only former Roller in the band). The group appeared in the Countdown Spectacular two-concert series in Australia in 2007. McKeown has completed two UK tours called Rollermania!, undertaken a UK tour of Once In A Lifetime with David Essex, Leo Sayer and The Osmonds and has appeared in the USA

McKeown developed a serious alcohol problem from about 2002,and underwent treatment in the Passages Clinic in Los Angeles which was documented in the Rehab reality TV programme that was broadcast on the Living Channel in the United Kingdom. In an interview with Scotland on Sunday in 2009, he talked about his sexual relationship with Tam Paton and his own bisexuality.[3]

Based on a Wikpedia article.