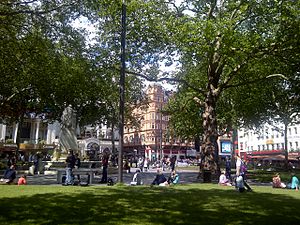 Leicester Square
Leicester Square is a garden square in London's West End. It sits in the middle of a pedestrian zone and is famous for its cinemas and film premieres. It was rennovated in 2012.

During the 1920s Leicester Square, along with The Strand, became the focus of queer commercial sociability[1]. It was the heart of London's nightlife and men could socialise in the galleries of the Empire and Alhambra, Jack Bloomfield's pub, Russell's Bar and the Cavour.

The gay focus later moved to the neighbouring Piccadilly Circus after suffering a demise after the Met and LCC clamped down on heterosexual vice, making gay men's presence less acceptable. In 1927 the News of the World lamented the Square's "decay... its conversion... from gay Bohemianism to ultra-respectability".

In the early 1990s an American diners-style bar called the Locomotion became almost exclusively gay and lesbian. The large nightclub on the corner of Charing Cross Road, the Hippodrome, had a weekly gay night on Mondays. The Limelight, a converted church, held Sunday afternoon tea dances organised by The Village. The Café de Paris hosted a weekly Sunday afternoon club in the late '90s, and still plays host to many queer functions.