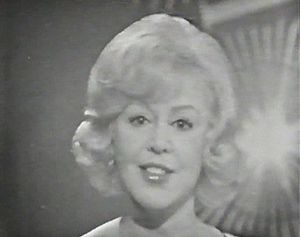 Kathy Kirby at the Eurovision Song Contest 1965
Kathy Kirby (1938–2011) was reputed to be the highest-paid female singer of her generation.[1]

She was born in Ilford as Kathleen O'Rourke and became a professional singer with Bert Ambrose's band. She adopted a "blonde bombshell" look that was compared to Marilyn Monroe. Her best known hit, recorded in 1963 was Secret Love. She represented the UK in the Eurovision Song Contest in 1965.

She was briefly married, but had a long-term relationship with the band leader Bert Ambrose.

In 1975 she became bankrupt, and was subsequently arrested for an unpaid hotel bill and referred to a psychiatric hospital. On her release she had a lesbian affair with a fan, Laraine McKay, who was later imprisoned for fraud and forgery.[2] In later years she was living on benefits.