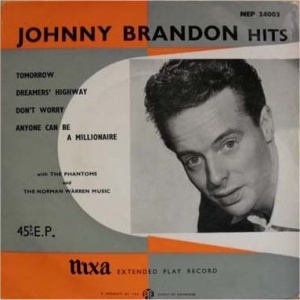 Record sleeve, 1955
Johnny Brandon, born 1924 (or 1925) in Stoke Newington,[1] is an English singer and songwriter, popular during the 1950s, who recorded for a number of labels. His perennial backing group was known as The Phantoms. His early hits included "Tomorrow" and "Don't Worry". He also recorded a version of "Slow Poke"; re-titled as "Slow Coach"; and "Painting the Clouds with Sunshine".

Brandon later composed several Off-Broadway musicals, such as Cindy (1964) and Billy Noname (1970). In 1979, he was jointly nominated for a Tony Award for Best Original Score, for his work on Eubie!. Brandon is also known for his involvement in the musicals, Ain't Doin' Nothin' But Singin' My Song (1982) and Oh, Diahne! (1997).

He now resides in the United States. He released his first solo album, Then and Now, in 2005.

"Consistent through all of Brandon’s work is his underlying message of equality and love. Openly gay, Brandon is strongly dedicated to encouraging openness about and acceptance of all people regardless of religion, race, sex and sexual orientation."[2]