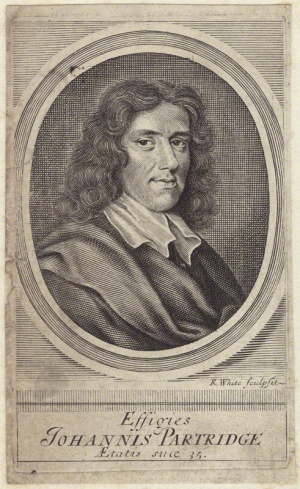 This article is about the astrologer. For the actor, see John Partridge.

John Partridge (1644 - c. 1714) was an astrologer. He was also the author and publisher of a number of astrological almanacs and books.

Although starting out in life humbly enough (he was working as a shoemaker in Covent Garden around 1680), Partridge managed to teach himself enough Latin, Greek, Hebrew and astrology to enroll at Leyden University, Holland. He graduated in medicine and by 1682 was styling himself "Physician to his Majesty". Although he was one of the sworn physicians of the court, he apparently never attended nor received any salary. Partridge undertook to himself the task of reforming astrology. His program for reform involved eliminating the elements derived from the medieval Arabic tradition in favor of a return to Ptolemy.

Partridge was strongly identified with the Whig faction in seventeenth-century English politics. He was forced into exile in the Dutch Republic during the reign of James II. The reign was also marked by Partridge's feud with his former astrological mentor John Gadbury, who converted to Catholicism.

Partridge appears in a list of "Famous Gay Men throughout history".[1]