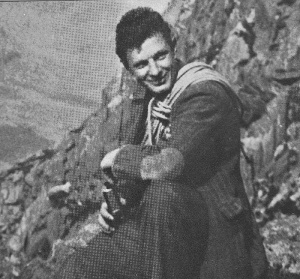 John Menlove Edwards
John Menlove Edwards (18 June 1910 – 2 February 1958) was one of the leading British rock climbers of the interwar period and wrote poetry based on his experiences climbing. He was born near Southport and studied medicine at Liverpool University, where he became a child psychiatrist. During World War II he was a conscientious objector.

Edwards was gay, at a time when homosexuality was still a criminal offence. After an unhappy personal life, which made him vulnerable to bouts of depression, he committed suicide with a cyanide capsule in 1958.

His first ascents include many of the now-classic rock routes on the crags of the Llanberis Pass in Snowdonia such as "Flying Buttress", "Spiral Stairs", "Crackstone Rib", "Nea" and "Brant".