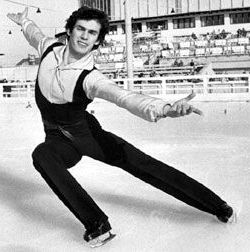 John Curry
John Curry, OBE (John Anthony Curry, 1949–1994) was a British figure skater. He was the 1976 Olympic and World Champion. He was famous for combining ballet and modern dance influences into his skating.

Curry was born on 9 September 1949 in Birmingham, England. He was educated at Solihull School, an Independent School in the West Midlands. As a child, Curry wanted to become a dancer, but his father disapproved of dance as an activity for boys, so instead at the age of 7 he began to take figure skating lessons.

For the first several years, Curry's involvement with skating was rather casual. Curry's father died when he was 16; he then moved to London to study with Arnold Gerschwiler, who coached him to his first British title in 1971. In 1972, Curry found an American sponsor who enabled him to study in the United States with Gus Lussi and Carlo Fassi.

Fassi coached Curry to European, World, and Olympic titles in 1976. Curry was the flag bearer for Great Britain at the 1976 Winter Olympics at Innssbruck, where he won q gold medal. He was also voted BBC Sports Personality of the Year in 1976. As an amateur competitor, Curry was noted for his ballet-like posture and extension, and his superb body control. Along with Canadian skater Toller Cranston, Curry was responsible for bringing the artistic and presentation aspects of men's figure skating to a new level. At the peak of his competitive career, Curry was also accomplished both at compulsory figures and the athletic (jumping) aspects of free skating. Curry's skating was unusual in that his jumps were performed counter-clockwise but most of his spins (except flying spins) were performed clockwise.

Following the 1976 World Championships, Curry turned professional and founded a touring skating company along the same lines as a traditional dance company. Besides choreographing routines for the company himself, Curry commissioned works from such noted dance choreographers as Peter Martins and Twyla Tharp. Curry was reportedly a difficult person to get along with, and a dispute with the business managers of his company forced it to suspend operations in the mid-1980s. After that, Curry performed only rarely in public.

Curry's Broadway theatre credits include Icedancing (1978) as a performer and director and the 1980 revival of Brigadoon as an actor.

Prior to the 1976 World Championships, Curry was outed as gay by a German tabloid newspaper, Bild-Zeitung.[1] It caused a brief scandal in Europe at the time, but Curry's sexual orientation was generally ignored by the press and public for many years afterwards.

In 1987 Curry was diagnosed with HIV, and in 1991 with AIDS. Before his death, he spoke openly to the press about both his disease and his sexual orientation. He spent the last years of his life with his mother. He died of an AIDS-related heart attack on 15 April 1994 in Binton; he was 44 years old. A 2007 biography of actor Alan Bates claimed that Curry and Bates had a two-year affair [2], and that Curry died in Bates's arms.[3] His life was subject of a BBC documentary called 'The Ice King' broadcast on BBC4 in Jan 2019.