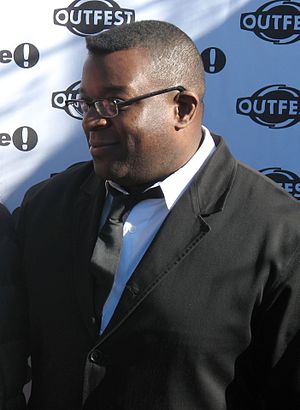 Julien graduated from Saint Martin's School of Art in 1985, where he studied painting and fine art film. He founded Sankofa Film and Video Collective, and was a founding member of Normal Films in 1991.

Julien came to prominence in the film world with his 1989 drama-documentary Looking for Langston, gaining a cult following with this poetic exploration of Langston Hughes and the Harlem Renaissance. This following was expanded in 1991 when his film Young Soul Rebels won the Semaine de la Critique prize for best film at the Cannes Film Festival.

One of the objectives of Julien's work is to break down the barriers that exist between different artistic disciplines, drawing from and commenting on film, dance, photography, music, theatre, painting and sculpture, and uniting these to construct a powerfully visual narrative. Thematically, much of his work directly relates to experiences of black and gay identity (he is himself gay[1]), including issues of class, sexuality, and artistic and cultural history. He was nominated for the Turner Prize in 2001, and in 2003 he won the Grand Jury Prize at the Kunst filmBiennale in Cologne for his single screen version of Baltimore. Julien is also a documentary filmmaker - his work in this genre includes BaadAsssss Cinema, a film on the history and influence of blaxploitation] cinema.

Julien lives and works in London. He was visiting lecturer at Harvard University's Schools of Afro-American and Visual Environmental Studies, and is currently a visiting professor at the Whitney Museum of American Arts. He was also a research fellow at Goldsmiths College, University of London, and in September 2009 he became a professor at the Karlsruhe University of Arts and Design. Julien is a patron of the Live Art Development Agency.[2]